At 5am we donned our head lamps, broke camp and packed up tent and panniers, including the things that fell off our make shift clothes line into the dirt and headed up to the safety of the baños.

Bob sparked up the stove, made some tea/coffee and we had a nutritious breakfast of canned fruit cocktail, crackers, boiled eggs topped off with a steaming cup of tea/coffee and cookies.

By the time we finished our breakfast and had our bikes packed we could see that our camp site was completely covered with water!

A Rain coat over a

A Rain poncho over a 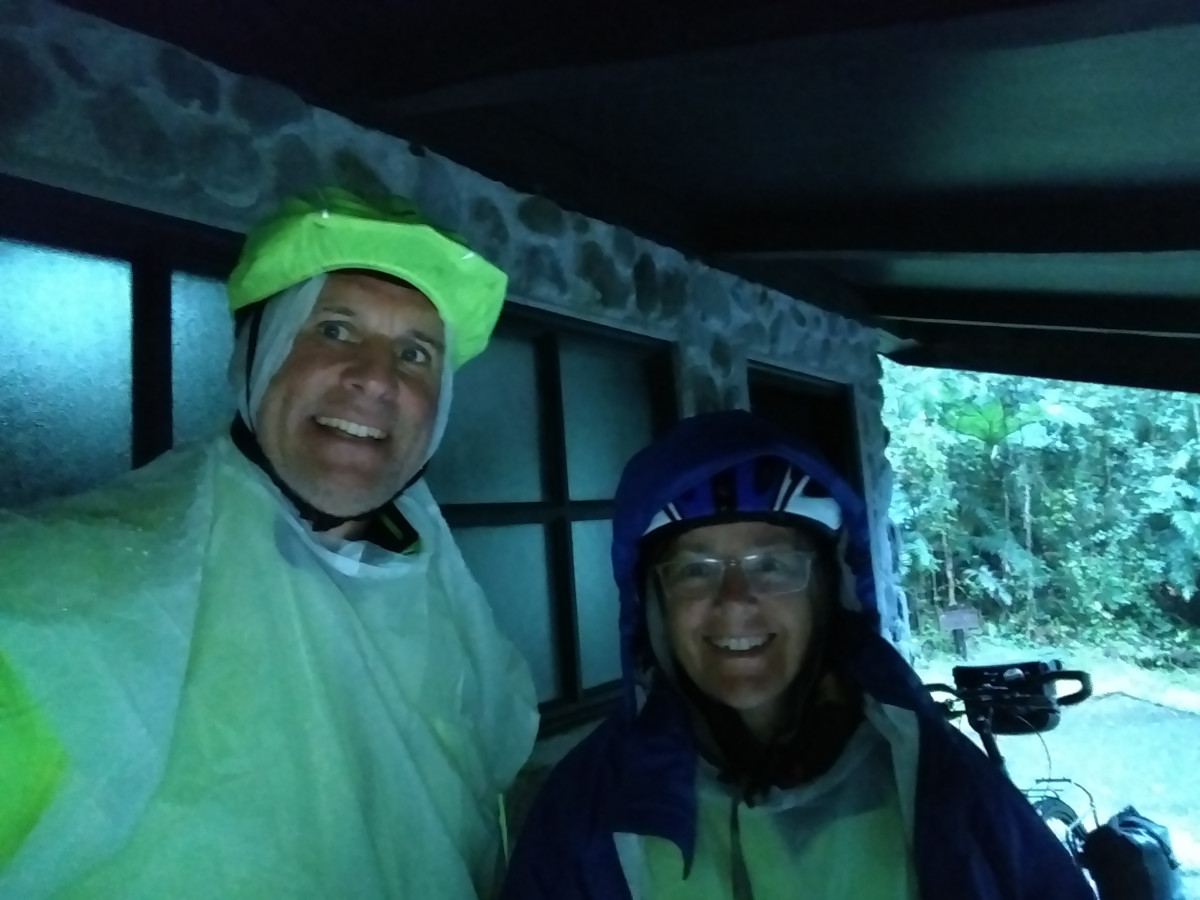 Into a steady rain.

About 100 m down the road we meet a spectacular waterfall. And by spectacular I mean violent. The water was gushing from the 100 feet up vertical face to the edge of the road. Splashing to the middle and other side of the road.

As we rode by it almost blew us off our bikes. The wind from the raging deluge of water was cold and the spray completely soaked us in one swoop. Excellerating and terrifying in one go!

That kind of set the tone for the rest of the day.

We were surprised to meet a cyclist along the road who stopped to tell us that he had to "jump a tree with his bike" that was blocking the road and to listen for "mud slides". Just what we wanted to hear. 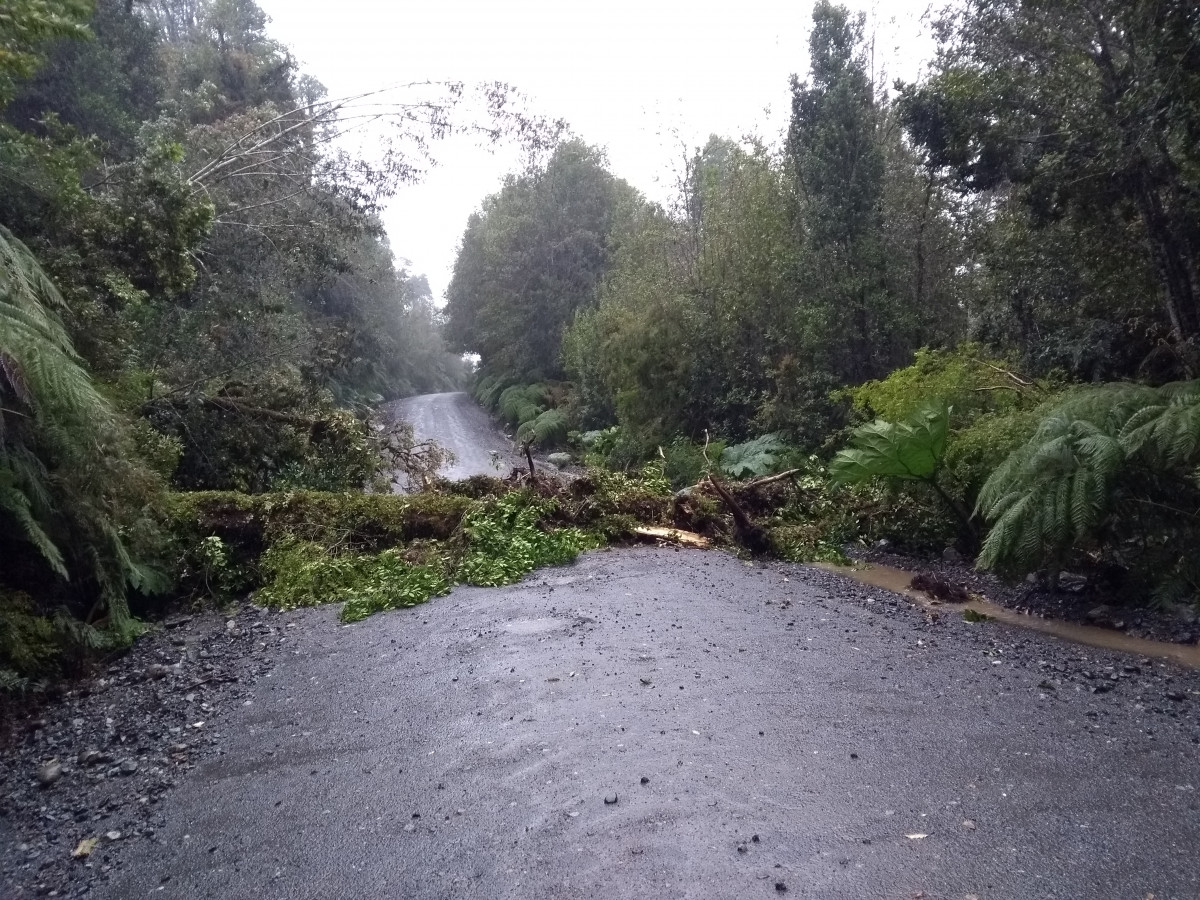 We meet the downed tree. And passed our bikes over the tree and... 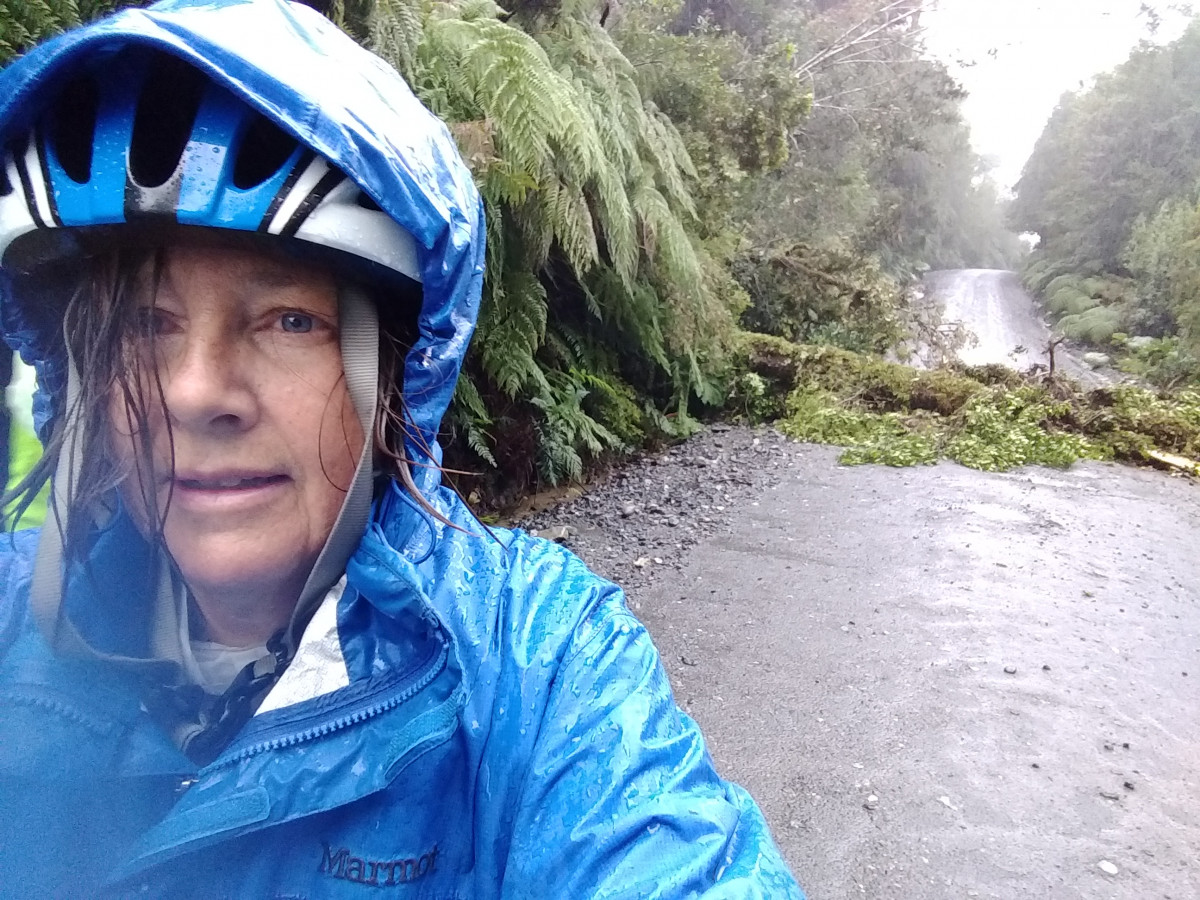 As we were pushing our bikes along a particularly steep section we heard an unusual "clumping bumping" sound and noticed that the full ditches were undercutting the vertical sides of the road and saw a clump of dirt tip over into the ditch.

The rivers were raging.

Waterfalls on the left cascading water on the right... More...

The road was washed out.

At one point the driving rain felt like little knife points hitting my face because the wind was blowing so hard.

Bob commented, I think the only dry spot on my body is my belly button.

We arrived at the port. And to our astonishment and good fortune. The cafe was open and we dragged our wet selves into the small cafe.

I took off my soaked socks and squishy shoes and left them out side the door. And slipped into my flip flops.

Bob grabbed a dry shirt and pants and we sat down to a cup of hot coffee.

This was at about 11am. The ferry left at 3 so we were there in plenty of time. There were small clutches of people some speaking German, Spanish, Dutch and of course us... English.

At 12 noon someone announced that all the ports were closed due to the wind and rain and there would be no ferries today.

If the ferry left its starting put at 4, it would mean, the ferry would arrive at Caleta Gonzalez 10pm returning to Hornopiern and dropping us at Hornopiern at 3am. Of course this was announced in Spanish and then translated to us by a German couple who spoke not one, not 2, not 3 but 4 languages!

The thought of spending another night in the rain in a tent was ... Was... Disappointing out what else can I call it terrifying? Didn't want to. We were cold. So we investigated our options.

It was windy. With gusts and torrential rain.

There was a bus shelter.

There were 2 cabins available so Bob asked to have one in the likely event that the ferry was cancelled. The waitress / hostess noted took our information (and credit card information) and we relaxed a bit.

All the while the wind seemed to be switching directions sending the rain from right to left out the window, then the next minute from left to right.

And dreamily over the restaurant speakers was a classical rendition of "somewhere over the rain bow".

Then at 4.15pm the confirmation came in that the ferry would NOT be coming. And we listened as the waitress/hostess announced that the ferry would be at the usual time (3pm) tomorrow and that everyone would have to return to Chaiten (55km away) to repurchase tickets for the new ferry.

There was a resounding NO from the 20 or so people who were also waiting for the ferry.

And Bob added, we are on biçicleta so we are not going anywhere.

Not to mention that we heard that the road had been closed due to washouts and Waterfalls!

The waitress/hostess then announced that she had to have everyone's names to put on the list for tomorrow's ferry.

And that the cabins would be ready in a few minutes. She gave us a key to the Puma cabin and we were set.

And that the restaurant would be closed from 4.30 till 6.30 so they could rest and prepare for supper.

Then a man came in with his camera and showed the waitress/hostess a picture and said, (think Australian accent here) we were sitting reading and we heard a crack then crash.

A tree has just fallen on one of the cabins! 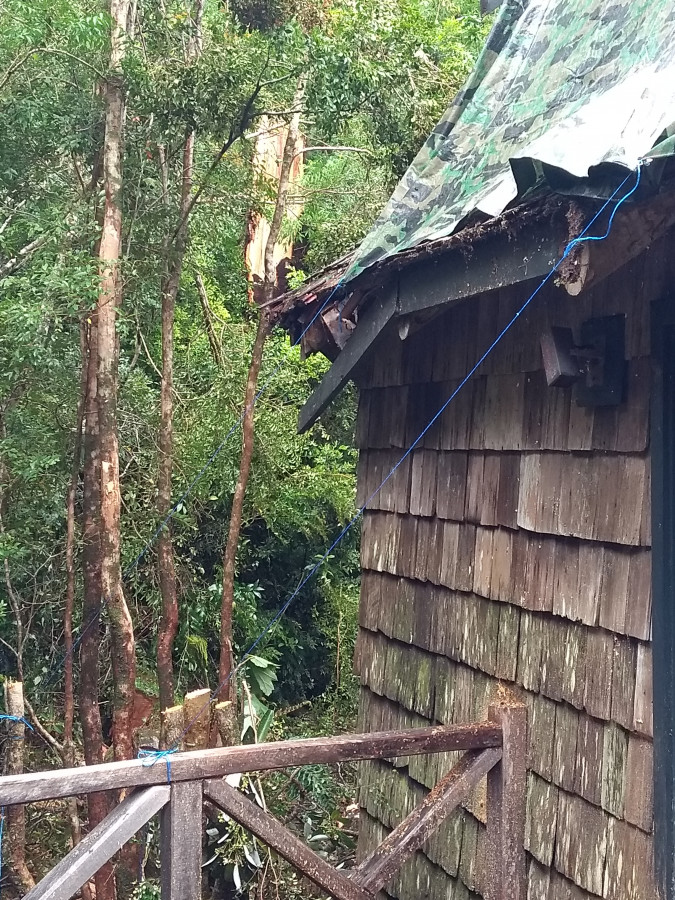 She rushed out and told us all to "be good".

About 30 minutes later she came back and said, that the cabins are unsafe, took our key and that the last two groups who booked the cabins would be housed in the rooms reserved for the summer kitchen staff.

We were cold and tired and just wanted to shower and tuck ourselves into bed. We really don't care which bed. Cabin or servants quarters.

About 6pm the waitress/hostess came back and told us that the cabins we ready and we could have a cabin for the night.

We didn't waste any time getting ourselves into a new cabin. Cabin number 4.

We rolled our bikes over to cabin 4 and dragged our panniers into the cabin.

It was warm and inviting with down comforter and real wool rough woven blankets.

We turned on the heaters to max. And made ourselves comfortable. 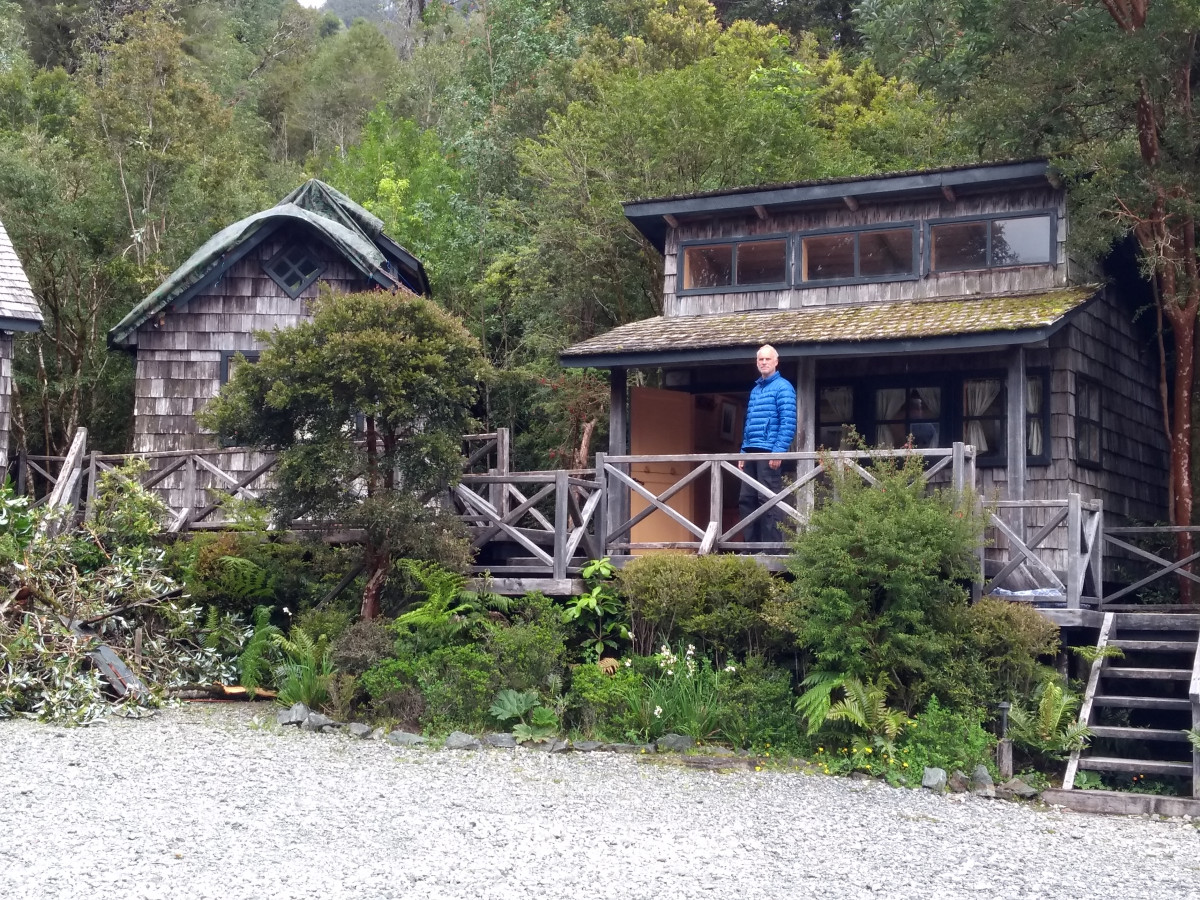 Then everything went quiet. The lights went out and the light on the electric heater went out. No electricity.

Bob thought that maybe we had blown a fuse because we had everything cranked up so high. He went to talk with the hostess/waitress who told him that the area had lost power and that there is just emergency power.

He came back with 2 lovely hot water bottles to keep us warm for the night.

We are now on a smooth ferry ride to Hornopiern. Scheduled to arrive at 8pm.